Dick Lane (see interview below) will be giving a gallery talk in the SRO Photo Gallery on Monday October 5, at 4:30PM; a reception will follow.

You can RSVP and find directions on Facebook or email us:  [email protected]

We hope to see you there!

An Interview with Dick Lane

Dick Lane’s series Kirilian Photography will be on view from Monday, September 21 through October 17, 2009.  We will be posting more information soon about his visit to Texas Tech and reception.  We recently asked him a few questions about his work:

Kirlian photography is not a widely practiced art.  How did you get involved in this practice and what do you feel it adds to your imagery?

I got involved with Kirlian photography during an extensive period of illness. Some time back I was misdiagnosed as having Crohn’s Disease. Crohn’s Disease is an incurable  auto-immune disease affecting the intestines. For the two and half years that I was thought to have Crohn’s disease I received intensive medical treatment that included blood work and frequent exams by X-ray.  I had the same radiologist each time and we spent quite a bit of time talking about X-rays and Photoshop. These conversations reminded me of strange pictures that I had seen sometime in my past and so I began to do some research. I finally came across the imagery that I had remembered and discovered that the process was known as Kirlian Photography.  The process is named after two Russian physical therapists who discovered the process which is a camera-less, lensless process whereby an electrical charge is passed through a conductive material on top of film in total darkness. The image is the result of a coronal discharge from the ionization of nitrogen in the air surrounding the conductive material.

I consider art making a “lifetime project” that reflects who I am and the way I think about the world around me. The period of time that I’ve done Kirlian photography adds and important chapter in the long term writing of my personal history. By the way… as I mentioned… I was misdiagnosed as having Crohn’s Disease. It turns out that I had chronic appendicitis and a ruptured appendix during that period. While I would not have chosen to get my artistic inspiration that way I think I ended up with some pretty interesting art.

For those of us not familiar with the process: Do the various vibrant colors occur naturally, or do you use filters to choose a yellow instead of or a magenta?

A further description of the process is probably in order here. The process of Kirlian photography happens through the use of a high voltage and very low amperage electrical charge. Essentially, this electrical charge is passed through a package containing a copper plate, a piece of large format film and the conductive subject material. A thick copper wire connects the electrical source to the copper plate and a second wire is made to connect to the subject matter with film being between the two. Because the process needs to be done in total darkness I made a jig that allowed me first, to safely use 15 thousand volt device and second, to register the film with copper plate and to “compose” my subject to a degree. This jig had a piece of plexiglass on top of it to help hold the film and subject matter in place. I found early on that there was a fairly consistent response in terms of color in the magenta and blue range when the package was sandwiched tightly together. It was by accident that I discovered if the distance between the connections that were made between the copper wire and the subject matter varied (also known as the “spark gap”) that I could influence the color of the image. Additionally, because the process was photographic I also had the ability to manipulate the color via darkroom techniques such as making negative prints, positive prints, cross processing of film etc.

Why are you choosing to make images with plant life, as opposed to another type of biological entity?

The main requirement for subject matter was that it be electrically conductive. In the beginning I had a device made that was very safe to use on “living” matter and I even tried it out on myself. While it was indeed safe….I could still tell I was “shocking” myself. With that in mind and thinking along the lines of the Hippocratic Oath (First, do no harm)  and Karma ( as in…I thought shocking my kitties probably would be bad Karma)  …..I decided I would only use conductive materials that didn’t involved sentient beings. I did try things like bird feathers and the like but they did not conduct electricity efficiently and some caught on fire. Ultimately, I did a small additional group of metallic objects that yielded very nice results.

Do you have any advice for those who might want to become involved with kirlian photography?

First….Read the book by John Iovine, Kirlian Photography: A Hands On Guide.  Second…Even though you might think you are doing things safely…double and triple check everything before flip the switch.

How does your work interrelate with Walter Benjamin’s thoughts on aura and artworks reproduced mechanically?

I have to admit that for the most part I don’t think of my work crossing into the realm of critical theory. That being said…I would say in general that I have a hard time disagreeing with Benjamin’s basic premise. I think it is ironic that one of the most appealing aspects of photography for a good portion of it’s history has been its “reproducibility via mechanical means”. In fact it was that reproducibility that I believe helped it thrive as a medium among the masses. Yet in terms of the object as commodity it is probably one of the major determining factors that have kept prices relatively low (and it’s inherent value to collectors low) by comparison to painting. As a photographically based artist who has shown in commercial galleries I’ve encountered the “aura of artworks”  problem and it’s relationship to photography. It’s a difficult perception for some collectors and gallery owners to get beyond. Given all of that…it just takes one look at popular culture at this point in history to understand that Photography is the most dynamic, democratic and important medium of our time.

Your website shows that you are working on a variety of projects.  Is there an overarching connection between your kirlian photographs and your other work?

I would imagine that a first time viewer of my website might think that it was a website shared by 4 or 5 different photographers. My interests are “many and varied” as they say and that has kept me continually excited about my chosen medium for my entire career. That being said…The thread that works through all of the bodies of work is the involvement of “Nature” as both subject and metaphor. Depending on where I’ve been intellectually or emotionally at any given moment I have found that nature has provided a universal subject matter, an artistic inspiration and a way for me to intersect with the world at large.

Be sure to come by the show before it closes on October 17.

The Southwest School of Art and Craft is exhibiting Abelardo Morell’s The Universe Next Door from September 17 – November 8, 2009.  I very much enjoy Morell’s work and am looking forward to seeing some of it first hand in San Antonio.

Also exciting is the opportunity to view a film on Morell’s life and take part in a question and answer session with Morell and the director of the film, Allie Humenuk.  This is all happening on October 8 at 7PM.  Reservations are required.

That film is Shadow of the House and more information on it and Humenuk may be found here. 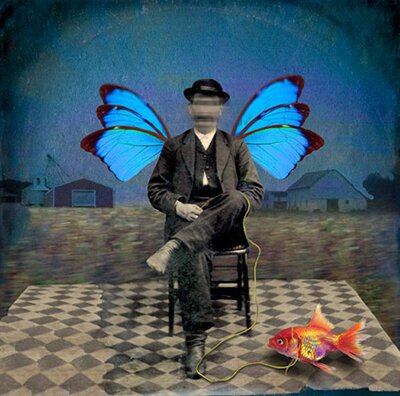 Richland College, in Dallas, TX, is hosting a lecture and image presentation with Jerry Uelsmann & Maggie Taylor on Thursday, October 1, 2009, at 7 P.M.  If you’re in the area, this is a great opportunity to hear these two artists talk about their work and have a book signed.

Richland’s Photographic and Imaging Program appears to be rather active.  In addition to this upcoming lecture, they have also recently hosted Keith Carter, Luther Smith, and others.

There are a lot of great programs in North Texas and lots of speakers coming our way this fall.  Get out there and see some.